The first performance outside of the UK, of Havergal Brian's Symphony No 1, better known as the Gothic Symphony, started rehearsals today. 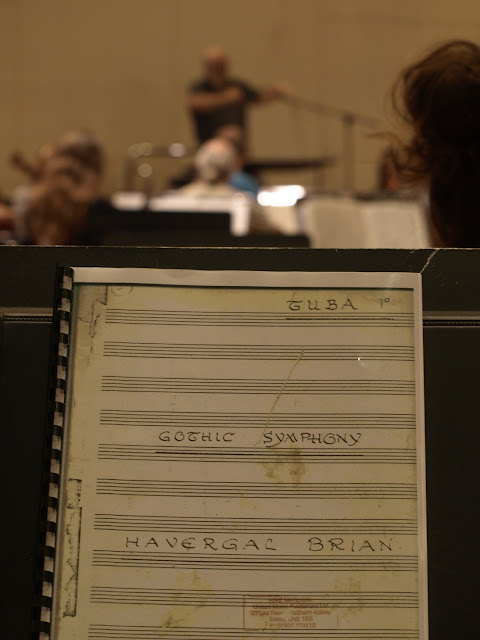 Registration and our first, albeit informal reheasal, started at 8:30am on this dreary, rainy Monday in Brisbane. It was also John Curro's, our esteemed musical director, birthday today. For those who didn't make it today, you missed out on a delicious birthday cake. 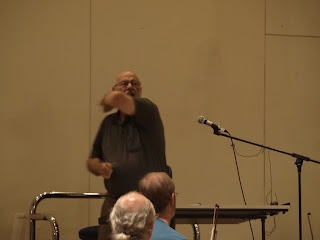 Roughly only half the orchestra was here for a read through of Part 1 of the Symphony. No choir either. For those who didn't attend today, the limited edition unique Gothic Mugs were only available today!

With most of the winds missing plus only half the trombones and trumpets in attendance, it was hard to make any sense of this work, despite it being an informal read through. The vastness and distant spacing of the orchestra didn't help matters either.

Rehearsals will be rather testing to say the least. Even with half an orchestra (no 350 piece choir) today, it was obvious the distant spacing made hearing the musical director a disciplined exercise in itself. Add quietly practicing tympani and general chit chat, it was almost impossible to hear John. Yes, he does have a microphone but harldy used it. I can't wait to see what it will be like with the hall full of 500 musicians!

The tuba part? A range of over 3 octaves is needed going from C 6 lines below up to G# above the staff. Some large jumping intervals punctuate what a trombone in attendance described as a tuba concerto with orchestra. Yes, lots of f, ff and fffs going down to ppp. Some solo and soli passages makes one proud to be playing the tuba.

A sticky beak at the contra bass trombone part revealed some juicy meaty stuff for them. Some tasty bass trom playing was noted at today's rehearsal. I can't wait to hear the complete brass section going full tilt! I pity the poor wind players sitting infront of us.

There should be pictures uploaded with this post but the software won't access my computer at the moment. I'll keep trying.


Posts edited - pictures added
Until then, stay in tune with the Gothic Tuba Experience